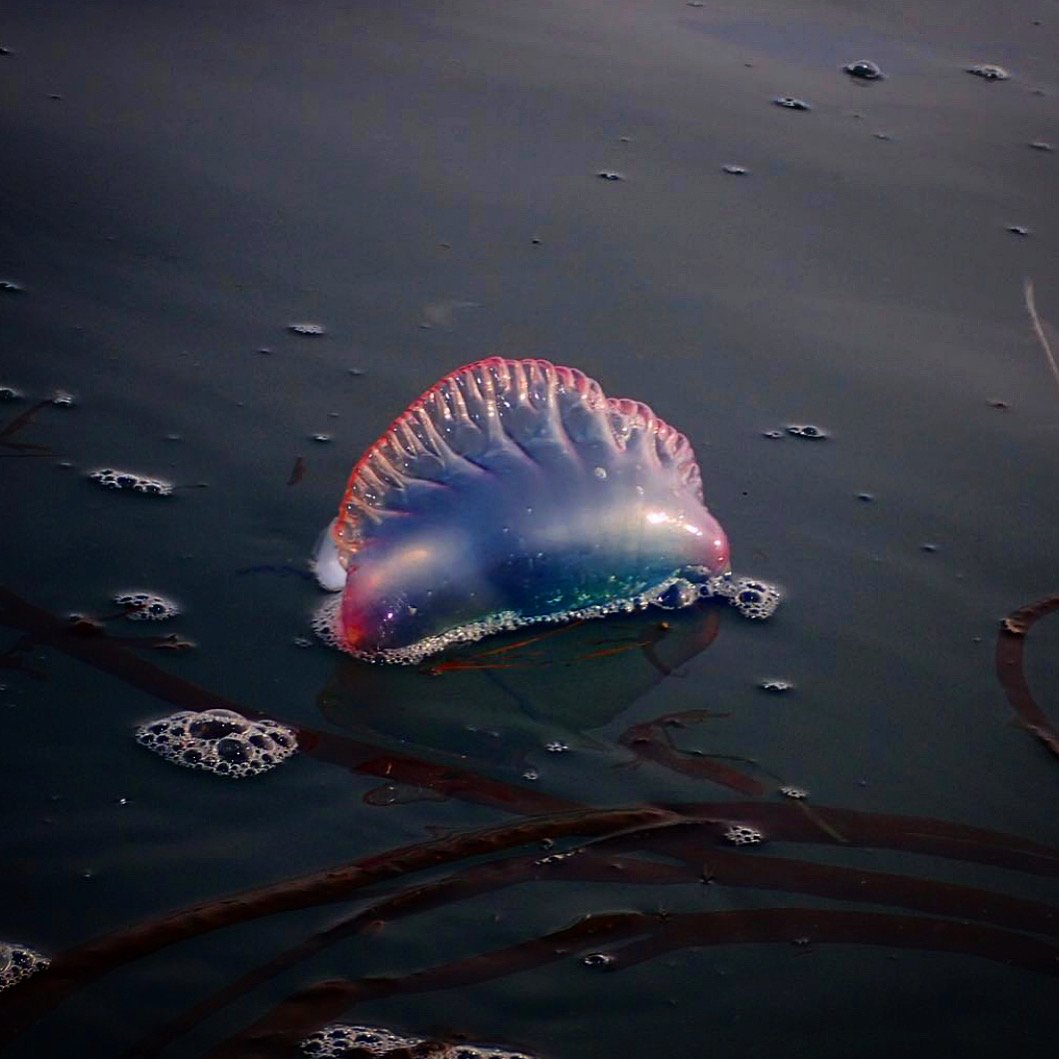 The predatory Portuguese Man-of-War is not a jellyfish as it appears, nor actually is it even a ‘it’. These weird pasty shaped creatures wash up all over Cornwall now every winter (thanks to our warming seas) and have since become our favourite animal (or animals?).

The Man-of-War is actually a siphonophore, a type of carnivorous colony made up of several individual animals. These individual entities are called zooids or polyps. The polyps/zooids work together, each with its own specialized role and separate nervous system. They consist of: (i) A pasty shaped float sack (or more accuratly a gas bladder known as a Pneumatophore) allowing them to float along the surface, and also acting as a sail; (ii) Up to 90-165 foot long, stinging Nematocyst-covered tentacles (Dactylzooids) for killing small fish and other small prey; (iii) enzyme-secreting digesters (Gastrozooids), which digest their prey once the tentacles do their work ; (iv) and the reproductive Gonozooids, which make new baby Man of War’s. The Man of War begins as a single fertilised egg cell (like most animals) which splits into four separate different mutlicelluar ‘animals’, who on their own cannot survive.

The weird co-existence of these combined parts may be how all complex life (us and all other animals) began. Imagine your legs, arms, gut and head all having a separate brain each and working together?!

The extraordinary symbiosis of the Man-of-War doesn’t end quite yet however. It also harbours within its tentacles symbiotic fish, called – rather unimaginatively –  the ‘Man-of-War Fish’, that feeds from scraps of the Man-of-War’s food and eats part of the siphonophore’s body! However, in return the fish acts as live bait to attract other fish. Other animals also use the Man of War for their own defence, Nudibranch Molluscs for example eat Man-of-Wars to use the Nematocysts in their own body to stop predators. The Man of War challenges simple ideas of what a organism is, giving rise to lots of questions which make us wonder whether any organism is truly separate from the rest of life.

Sadly the appearance of these marvellous wonders is less than marvellous – their continual reappearance on Cornwall’s shores is a warning sign of the changes warming waters will have on our coastal ecosystems.

We almost capsized in the kayak when trying to take the photos above, we’re all very glad we didn’t because the stings are agonising – and in rare cases fatal. If you even see one on the beach keep your fingers and toes well away!

The Sharks of Cornwall