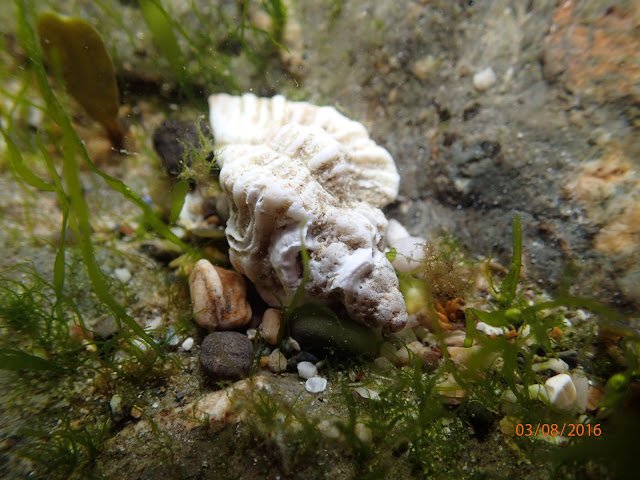 For millions of years shells made of calcium carbonate were all the rage amongst marine life, then a new plucky family known as vertebrates turned marine fashion inside-out by putting skeletons on the inside.

Why this dramatic change? Big tectonic plate movements 1.5 billion years ago released huge amounts of minerals from the Earth’s crust including, importantly, calcium carbonate (CaCO3) into the primordial oceans. Marble, limestone and chalk and are all forms of calcium carbonate. Calcium carbonate, other than being used in buildings, making concrete and cement, is the ‘keystone’ molecule in nearly all shells and skeletons.

Our ancestors, who this long ago were opportunistic single celled microbes, used the calcium carbonate to make stone-like shells. This was a win/win as it: protected them against other dangerous minerals which would otherwise build up on their surface and starve them; and removed the calcium they had pump out anyway, stopping deadly imbalances of internal cell pressure. These win/win calcium shells became common and were worn by nearly all life.
Our ancestors the early vertebrates, simply meaning animals with a physical not metaphorical backbone (we can still be cowards), swapped their exoskeletal shell for a internal skeleton made instead of calcium and phosphate. Why did the winning fashion change? Why would vertebrates change a skeletal strategy that had a proven track record, instead internalising the skeleton and integrating phosphate?
Well scientists think there is two reasons. One having phosphate stores (helping make ATP or energy molecule) provided useful sources of energy for our newly active animal ancestors. This reason alone doesn’t make sense though, as this would be also be an advantage for invertebrates too and doesn’t explain why you need an internal skeleton instead of shell.
The second reason may be that the mix of Calcium & Phosphate made a stronger material for a skeleton, more resistant to the chemical conditions of our bodies. Adding phosphate made skeletons more resistant to the acids nearly all animals release internally after physical activity, called lactic acids. Calcium carbonate skeletons couldn’t be internal as they would erode away leaving us saggy lumps on the ground.
Once the vertebrate internal skeleton evolved, it became trendy. The new internal skeleton enabled vertebrates to expand into new environments and ways of life, expanding our ancestors range of physical activities and abilities. This lead to a tandem positive feedback evolution of stronger more-acid resistant bones and stronger muscular system, which in turn released more & more lactic acid from anaerobic respiration when stressed, meaning more acid resistant bones and so on. These strong internal skeletons added further accessory benefits such as greater mobility, sensitive & regenerative skin and greater physical endurance. Simply put, Phosphate => Stronger Bones and Greater Activity.

The Sharks of Cornwall