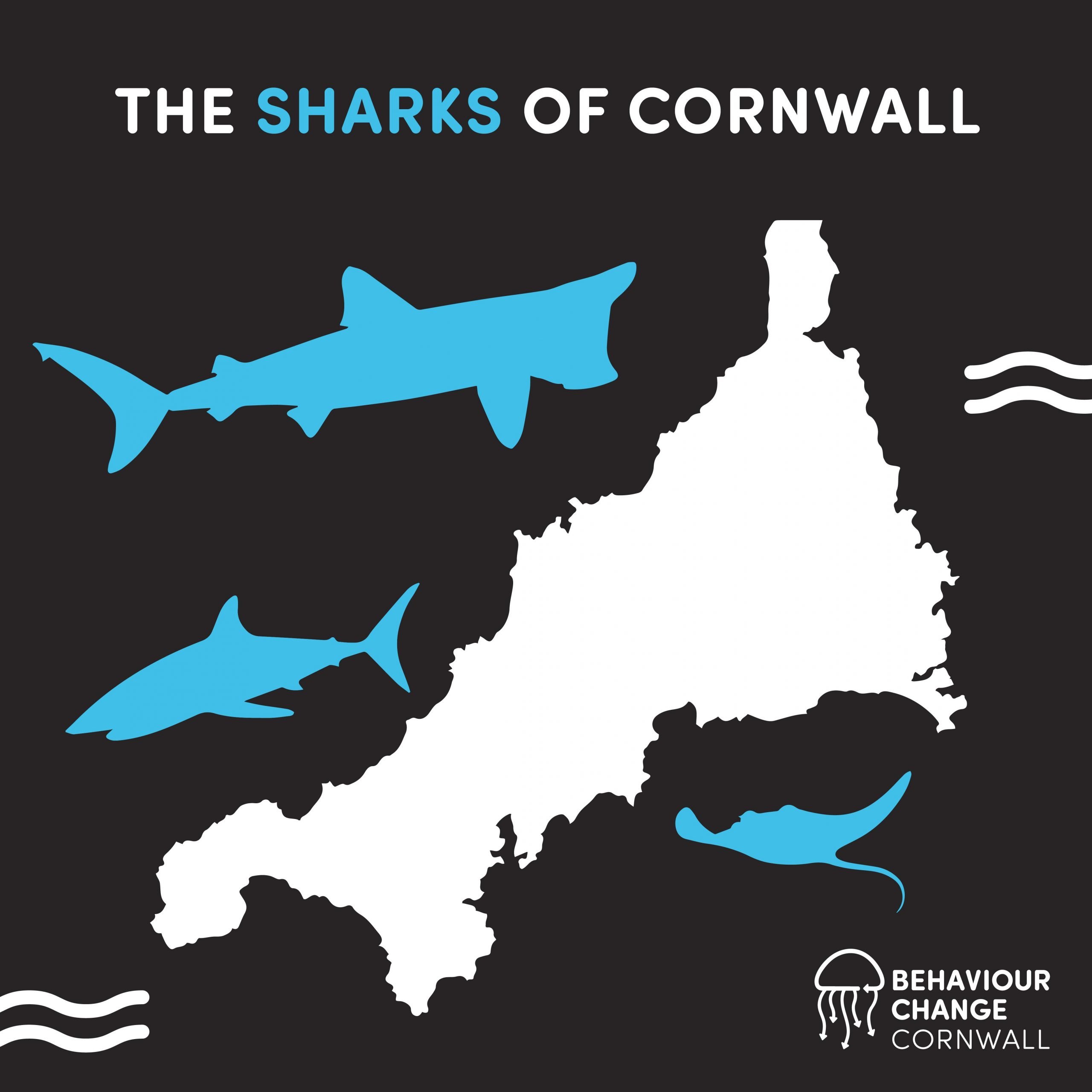 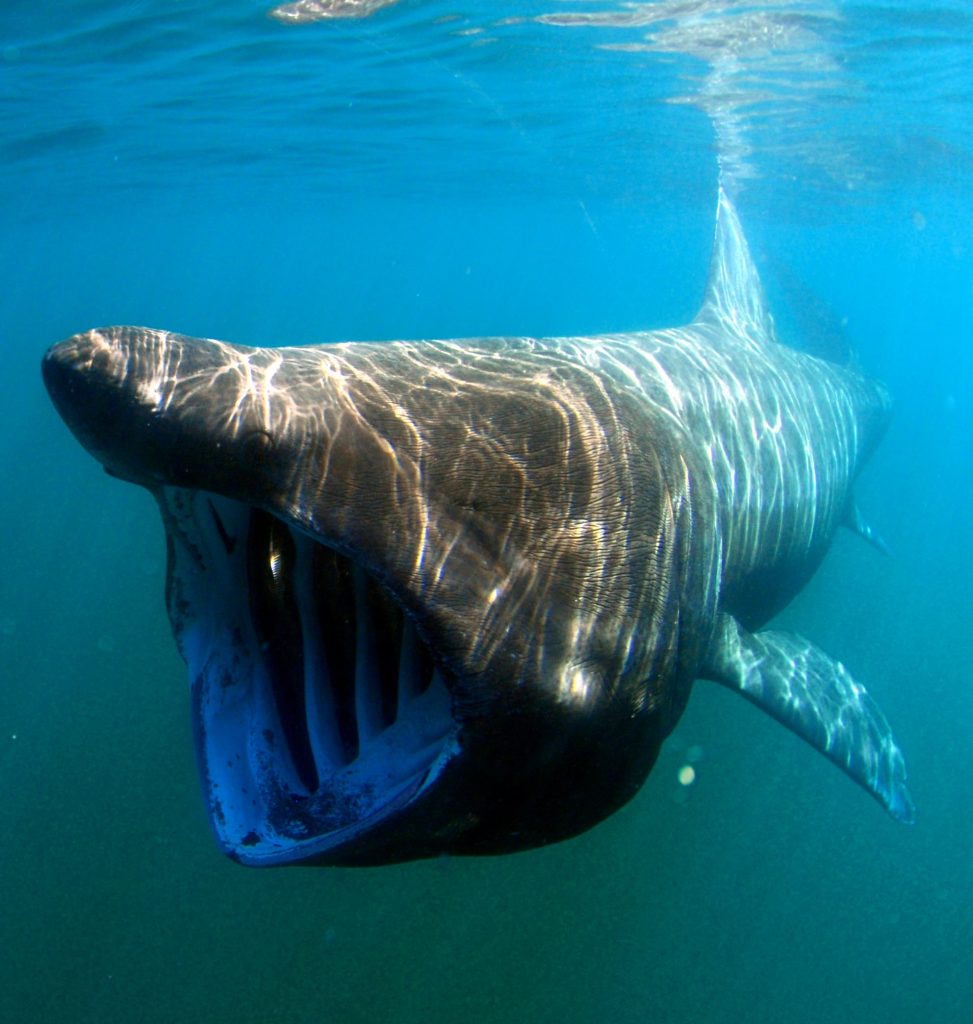 Basking sharks are the second largest fish in the ocean – enormous enigmatic sharks who glide along our coastline with a great dark triangular fin jutting out above the waves. Gentle giants – over 12 metres in length – basking sharks only eat the tiniest planktonic creatures at the surface, swimming with a gaping mouth open to filter out their microscopic meals. Surprising little is known about their habits. It is thought they migrate the oceans arriving hear to breed and often reach an age of 50. They are most commonly seen in summer. 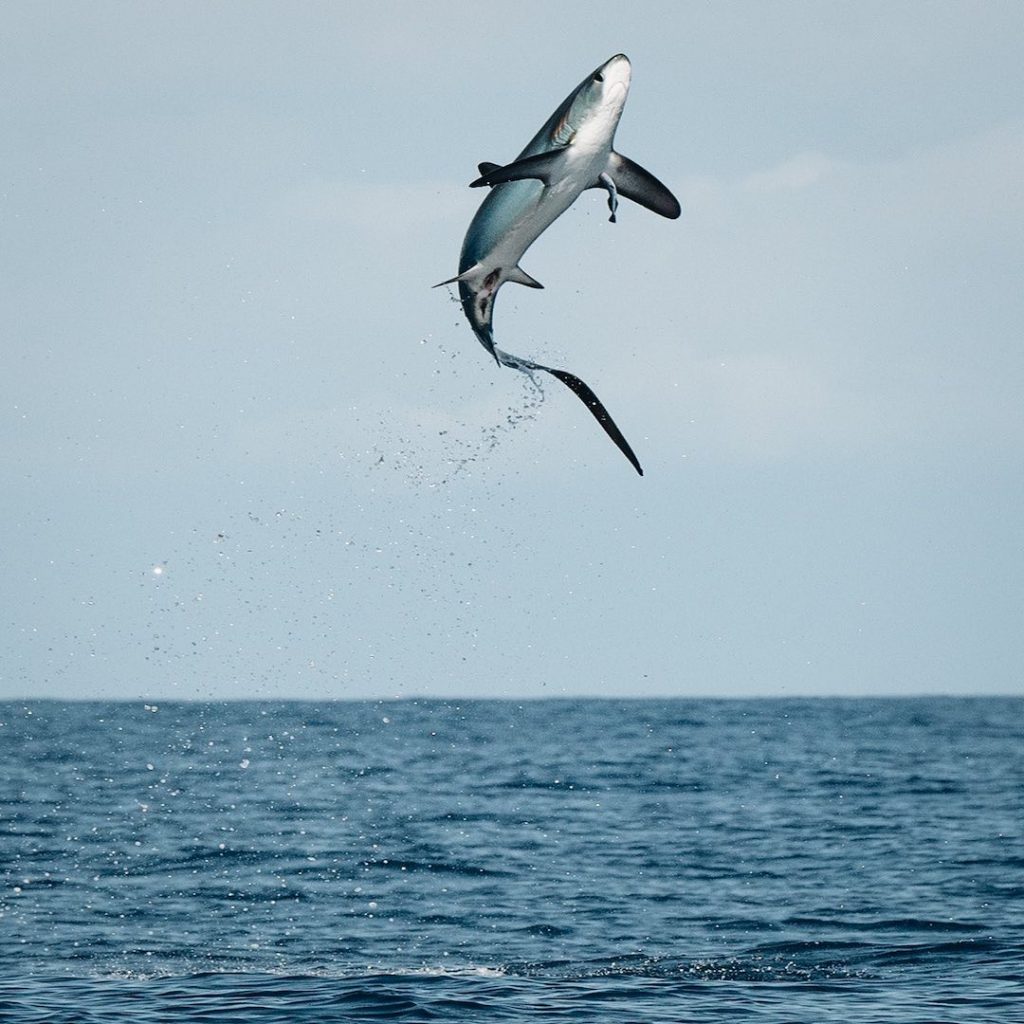 Thresher sharks spend their lives in the depths of the sea, only coming to the coastlines in the summer. Unlike most other sharks and fish, due to their lifestyle in the deep sea, they have evolved to be endothermic – able to keep their body warmer than their surrounds. What differentiates these sharks is the very large upper part of their tail and their rare to witness habit of jumping out of the water above the sea. 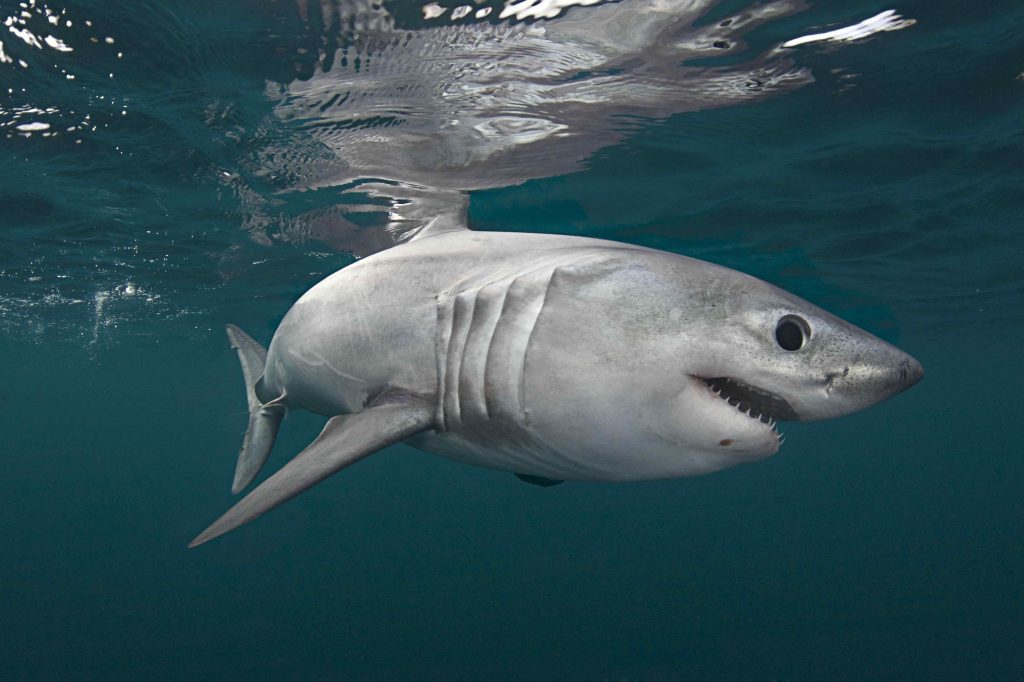 Porbeagle Shark in the North Atlantic Ocean by Doug Perrine

Porbeagle sharks are a close cousin of the Great White Shark. The large bluey-silver backed shark has a white belly and has a pointed snout between piercing black eyes. They are strong hunters of the deep preying on squid, cuttlefish and mackerel amongst offer fish. One tagged in Looe was found over 2000 miles away in the mid Atlantic! Like the Thresher they too are endothermic. 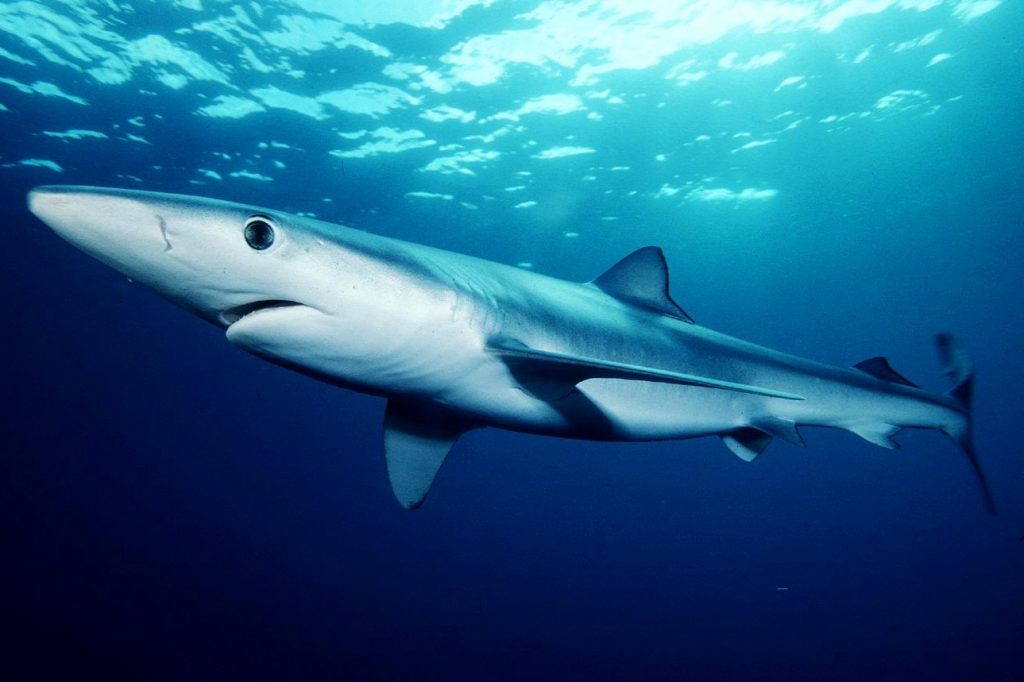 Blue sharks roam in the open sea following ocean currents from the Caribbean to Cornwall and back again around the Atlantic. Quick and clever blue sharks like to eat small fish, squid, seabirds and even smaller sharks. They can grow up to 3m long and have a metallic blue back and white underbelly with very long front fins. 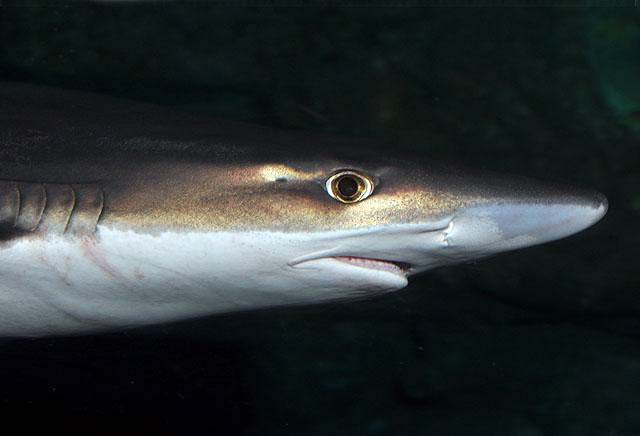 Tope sharks are a long slender shark with a notch in their tails. They are found all around the UK but are most common here in the southwest. They’ll eat anything from fish, to squid and even crabs. 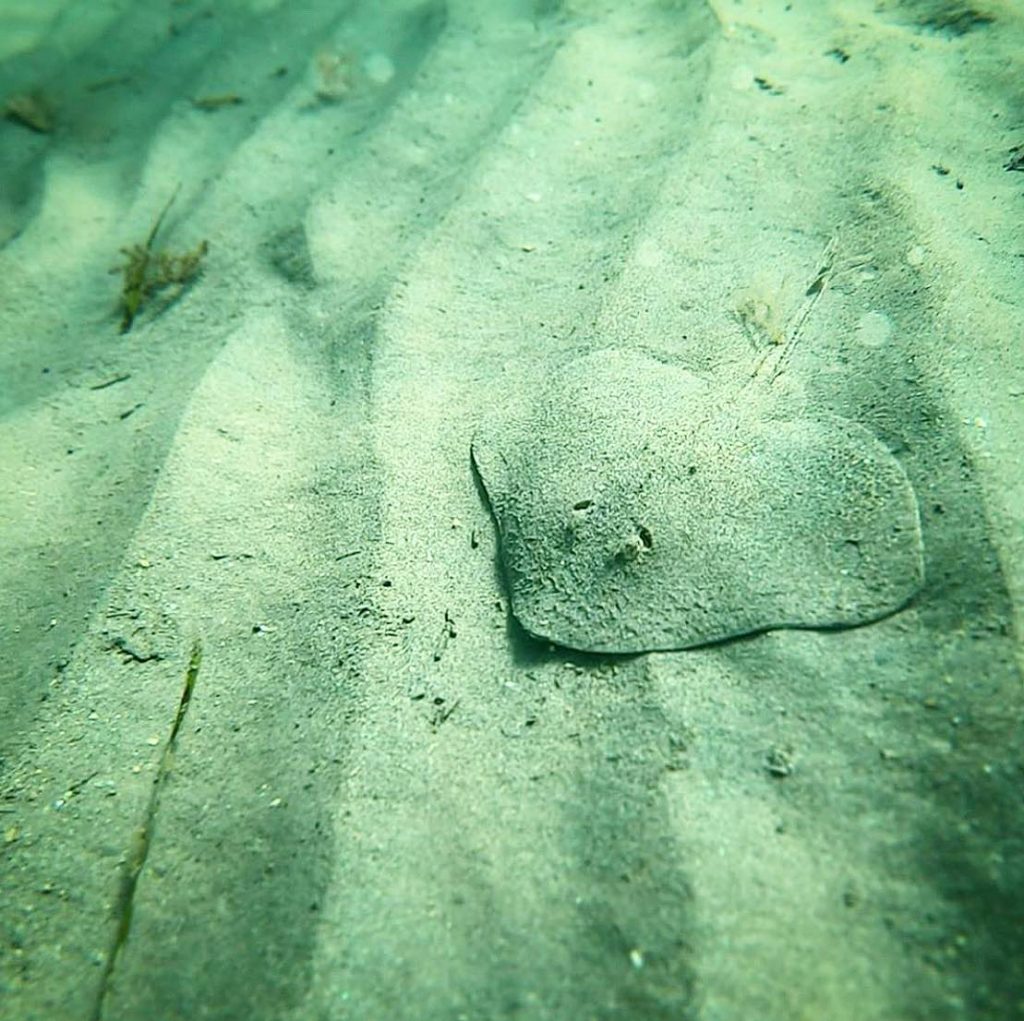 Skates are flat rays and those in Cornwall are the largest found in the world. When they breed they entangle small egg sags into the seaweeds underwater which wash up to shore as mermaids purses. They love the sandy flats off Looe especially where they feed on crabs and fish who get too close to these ambush predators. Skates are now a critically endangered species – avoid eating ‘ray wings’ which are often mislabeled skate. 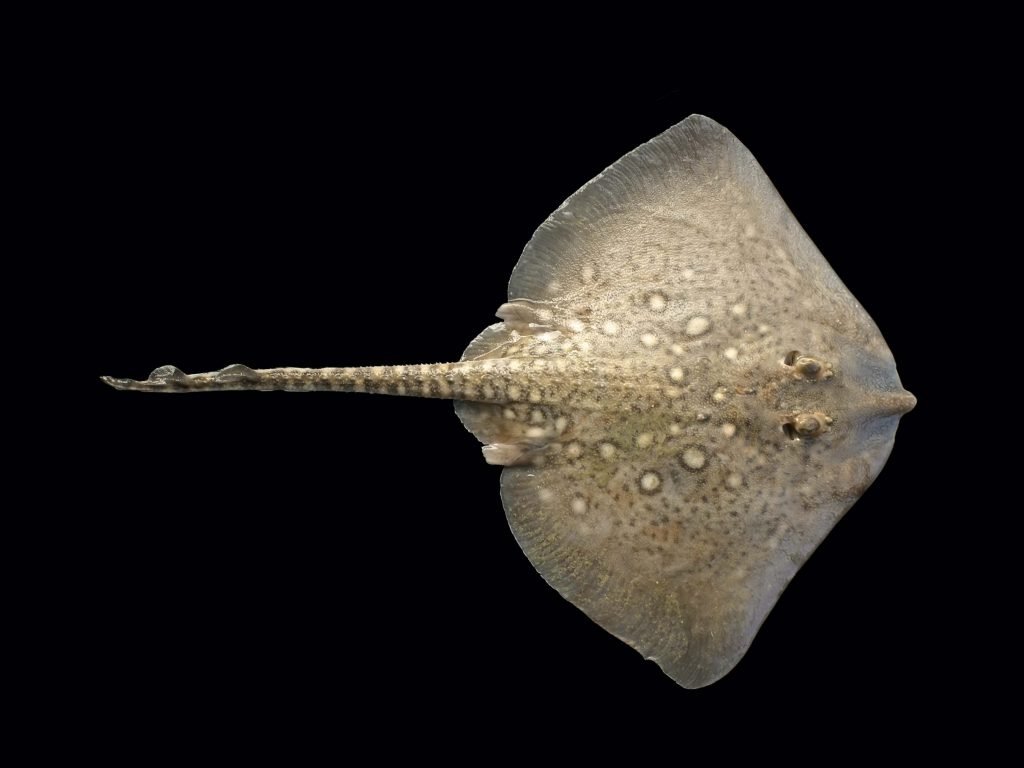 Thornback Rays are related to sharks and like all sharks have no bones. They are shaped like a flat diamond, flapping their oversized fins to fly through the water. Named after the thorns on their back, Thornbacks feed mainly on crustaceans and fish. They like to bury themselves in the sand during the day and come out to hunt at sunset. 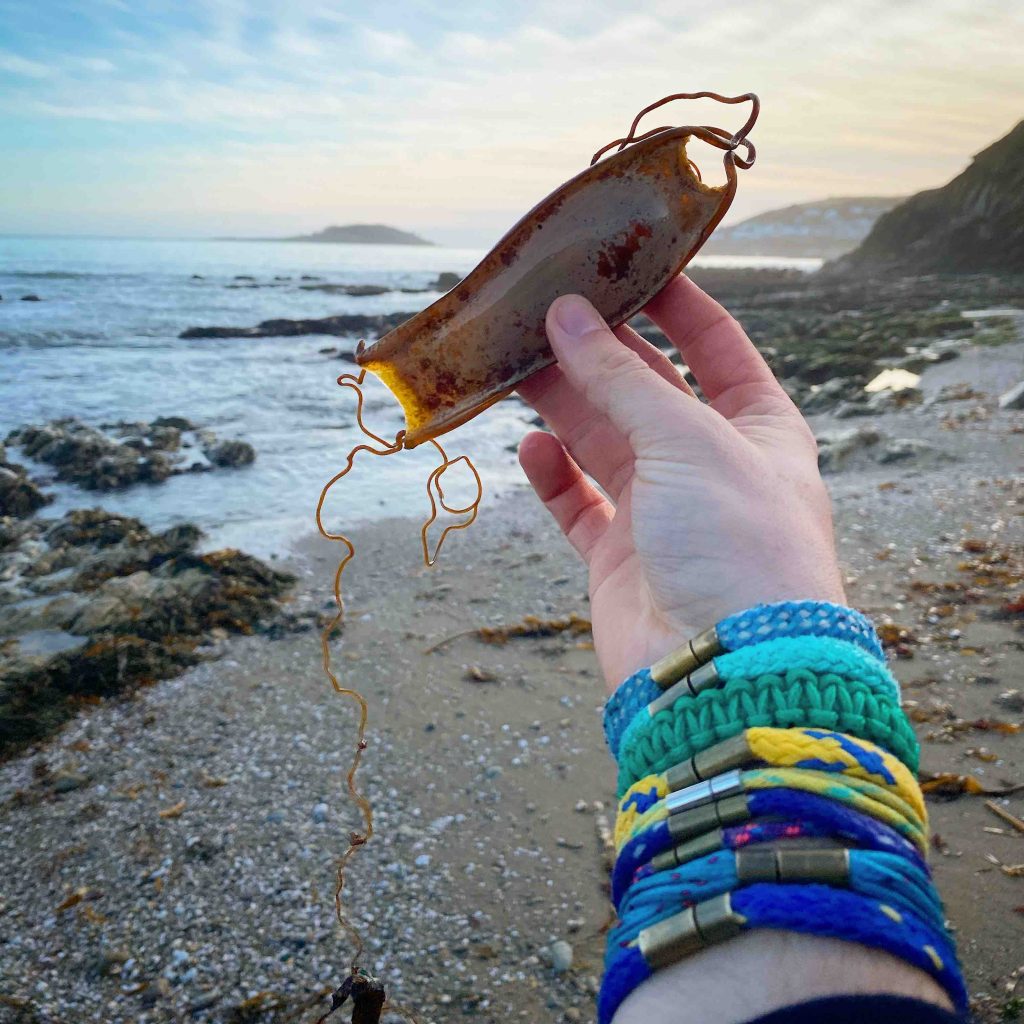 Small-spotted Catsharks, Spurdogs and Nursehounds are related species of small sharks often known as Dogfish. They all have rough sand-papery skin that acts as a form of armour and protection. The small-spotted catshark is identified by its smaller size and high number of little dark spots over its body. The Spurdog is has a pointed rather than rounded snout, large eyes and a streamlined grey/brown body. The largest species, the Nursehound is a stockier towards the front and has large spots all over its body. All species lay egg cases known as mermaids purses – they have curly tendrils for attaching themselves to rocks and seaweed. They are often mistaken for each other and have names such as Rock Salmon, Dogfish, Rough Hounds, Catsharks, Bull Huss sharks – a lot of names! All these species at certain times tend to gather in massive and mysterious clusters at wrecks and reefs which makes them very vulnerable to fishermen. They all like to each small fish, squid, octopus, crabs, shrimp and other juvenile sharks.

We hope you are lucky enough to see some of these species of shark underwater – which despite their fearsome reputation are entirely afraid of humans.

Good things come in small packages: miraculous microbes and where to find them